Your vision is a valuable asset, and we strive to help each of our patients enjoy the best vision possible. At Broberg Eye Care, advanced technology meets the time-tested value of honesty, education, and exceptional service. Whether you are experiencing compromised vision, or simply need to establish ongoing care with a reputable vision care specialist, we can help you. To learn more about how we can help you achieve and maintain dependable vision, we invite you to contact our practice today.

Our doctors share a passion for Ophthalmology, as well as a belief that a conservative approach to eye care is the most beneficial to our patients. We work together as a team to provide our patients with outstanding care that is tailored to each patient’s individual needs. 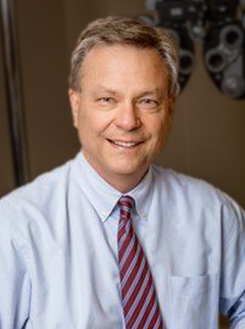 After graduating from high school in Richardson, Dr. Broberg went on to study anthropology at the University of Texas. Dr. Broberg graduated from the university with high honors. Next, Broberg decided to continue his education at Baylor College of Medicine in Houston. In 1978, he graduated from Baylor College of Medicine, again with high honors. After graduation, Dr. Broberg began a residency at Mercy Hospital in San Diego before returning to Baylor to complete that residency. During his training at Baylor, Dr. Broberg was awarded “Outstanding Intern,” as well as being elected chief resident.

Upon completing his internship at Baylor College of Medicine, Dr. Broberg began his professional career by opening Broberg Eye Care in 1983. Dr. Broberg served as the sole doctor for many years, slowly growing his business by building a reputation among satisfied patients. Eventually his practice grew to the point that it was necessary to expand his staff by adding Dr. Halsey Settle, Dr. William McGlathery, and Dr. Ximena De Sabra. In the nearly 30 years that Dr. Broberg has been a practicing ophthalmologist, he has provided his patients with comprehensive eye care that includes eye exams, diagnosis and advanced treatments.

Throughout his career, Dr. Broberg has achieved many professional accomplishments. Dr. Broberg has been featured in Texas Monthly Magazine. He was later voted by his peers to be one of Austin’s “Super Doctors.” He has also been recognized as a “Best Doctor” by Austin Monthly Magazine for three consecutive years. Additionally, in 2006, Dr. Broberg was recognized by the Consumers Research Council of America as one of “America’s Top Ophthalmologists.”

On a personal level, Dr. Broberg considers his family to be his greatest triumph. In his free time, Dr. Broberg enjoys spending time with his wife Diane, as well as their children and grandchildren. 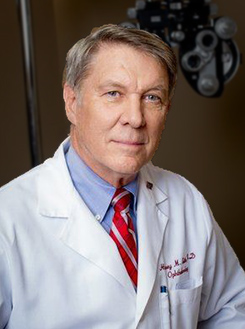 Growing up in Corsicana, Dr. Settle graduated from high school in 1963. He then began his pre-med education at the Oklahoma State University, where he was awarded an athletic scholarship. While at the Oklahoma State University, Dr. Settle was honored to be selected as a recipient of the “Top Ten Student” award. In 1967, Dr. Settle continued his education at the University of Texas Medical Branch. Upon graduating from the University of Texas, Dr. Settle began a medical internship at Breckenridge Hospital, and later completed a residency in ophthalmology at the Navy Regional Medical Center in San Diego, CA.

In 1980, Dr. Settle began work at the Medical Art Clinic in Corsicana, where he worked in the ophthalmology department. Dr. Settle worked there until joining us at Broberg Eye Care in November of 1999. Since joining us, Dr. Settle has been a great asset to our eye care practice. His education, experience, and professional demeanor are admired by both the members of our staff and our patients.

Dr. Settle considers his wife Donna, his four children, and one grandchild to be his greatest personal achievements. Joining Broberg Eye Care has allowed Dr. Settle to be closer to his family.

Professionally, Dr. Settle has a long list of achievements. He has been recognized by Austin Monthly Magazine as one of Austin’s “Best Doctors,” and he was also selected as one of the “Best Doctors in America.” Dr. Settle is a proud member of a number of professional societies, including The American Medical Association, Association of Military Surgeons of the United States, Texas Medical Association, and the American Academy of Ophthalmology. 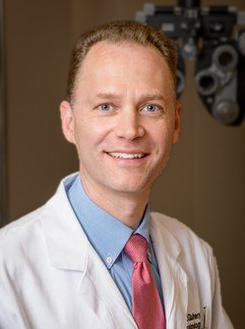 Dr. McGlathery is certified by the American Board of Ophthalmology and is a member of several professional organizations, including the American Academy of Ophthalmology, the American Medical Association, and the Austin Ophthalmology Association. Dr. McGlathery has also undergone an extensive certification process with AMO that allows him to perform laser vision correction procedures including iLASIK, or blade-free intralase, custom Wavefront LASIK, and Photorefractive Keratectomy (or PRK). These procedures utilize the latest technology and techniques to offer our patients long-term vision impairment correction.

Dr. McGlathery was born and raised in Jackson, Mississippi. He is married to Stacia Miles M.D. and the couple have two children, Alexa and Christopher. Aside from spending time with his family, Dr. McGlathery enjoys cycling in his free time.

Dr. de Sabra attended high school in Florida. She then moved across the country to attend the University of California at Berkeley, where she majored in Genetics and Chemistry.  After receiving her Bachelor of Science degree, Dr. de Sabra returned to the East Coast to pursue studies at Ivy League institutions.  She completed her postgraduate Biology program at Columbia University in 1991 and obtained her M.D. degree from Brown University in 1995.

Upon completing her training, Dr. de Sabra entered private practice.  She has been serving the greater Austin community with pride and dedication since 2004. She has a longstanding relationship with the University of Texas Athletic Department, and serves as Ophthalmologist for their student athletes.

Dr. de Sabra was born in Colombia and is fluent in both English and Spanish. She is married to her Med school sweetheart, Dr. John Sabra. They have two sons who have grown up enjoying our local lakes and hiking trails.

“I have seen Dr. Broberg for many years now and always thought he was a good doctor and highly recommend him. He ranks even higher in my ratings now. I recently had an eye issue – scratched cornea that very quickly turned into an infection. They worked me into their busy schedule I saw Dr. McGlathery – a new doctor at the practice and Dr. Broberg. I have always used an ophthalmologist for my eye exams – a good practice in my opinion.”

“About 4 or 5 years ago my husband had an eye emergency (woke up with double vision, caused by a bad chiropractor who worked on his neck!). Dr. Broberg came in on a Sunday morning to see my husband. He was very caring, calm, not expensive and made the accurate diagnosis. He now gets all our eyecare business and never disappoints.”

“Dr. Settle was very thorough and answered my questions to my satisfaction. I have had eye surgery in California from an excellent retinologist, and Dr. Settle compared very favorably. I noted plaques on the wall indicating Top Doctors for 2007 and 2008. My experience is such that I will continue to go to him.”